— Michael Neale
Both Mark and myself recently returned from the highly informative Business Rules Forum (in Washington DC).

The business rules industry seems to be in quite good shape, and there was a strong showing from all the vendors. I thought I would start with some summaries in general of what we saw, and what I thought.

The engine performance panel
James Owen – an industry commentator and rule practitioner and evangelist of many years experience, kindly hosted a panel on performance challenges for rule engines (for the geeks). It was a real whos-who of rule engine core tech.

Take a look at the panel of braniacs below (James Owen is missing, he was talking). 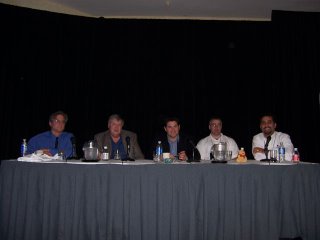 There were strong offerings from all the vendors on rule management/editing/higher level tools, and an understanding that a lot of the core tech is being commoditised. Nevertheless, there were many different approaches. Here is an outline of the products/companies that tickled my fancy:

So it was an impressive showing from the Vendors. I am sure I missed some out, but this is all I had time to write notes on.

Future challenges
No one seemed to agree on a single way forward for modelling facts, some were talking MDA (MDA was a strong theme), some were purely WSDL/Web Service, and utilising OWL was even mentioned a few times (personally over the long term, I think OWL ontology’s may be The Way, but I am only new to them so I shouldn’t show my ignorance just yet). Modelling facts is a real challenge, and very few people were also thinking about how to cope with model evolution over time (as no one will get it right first go).

Rule standards are another major challenge, I am not expecting anything concrete for some months, perhaps a year. It was great to meet Said Tabet (of RuleML fame) and hear his opinions, and its also great to see vendors like ILog take RIF from W3C very seriously.

Truth, Justice and the American way
I found the US to be surprisingly familiar in every way, more so then Britain. The “tipping” culture took a while to get used to, I felt embarrassed as I had to ask people when to tip or not tip, how much etc. A feature of this seams to be to deliberately cause conflict. On the flip side, the service for everything was excellent. It was a hoot hanging around with James Owen, the ultimate Texan ! From my sampling of several Texan acquaintances over the years, I can say that I like Texans ! 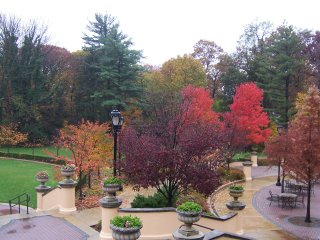 The hotel was fantastic, and I was impressed by the array of Autumn colours (Autumn seems to be taking its time in the UK).

Next
Next week we will be in Berlin for JBoss World (I am arriving a little early to do the tourist thing, as a native to the Land Down Under, there is plenty over this side of the globe I have not yet seen – its all good !). If you are there, make sure you find Mark Proctor or myself, we have t shirts to give away !