Day 1 of the Drools Boot Camp is going well, unfortunately Michael Neal from the core team couldn’t make it in the end 🙁 However Edson, Kris and Toni are all here 🙂

The Boot Camp runs until Wed 22nd of October where the Rules Fest conference starts, which we will all be attending. The Boot camp is open to all, so if you are in the Texas area, do please come and join us, we are staying in the Best Western Hotel, Addison.

Today we’ve been joined by:

Jens Ruehmkorf from German Aerospace Centre is in Texas but is tracking down his luggage, which has been lost, hopefully he will be with us tomorrow.

It’s been an interesting day and I’ll do a separate project later on topics covered. We have discovered the best hotel ever with free food and beer 🙂 Here are some photos of the day:

Free food and the beer, the beer cooler is at the square box in the left of the photo.

Some more general shots of everyone hard at work.

And finally a picture of us at lunch. 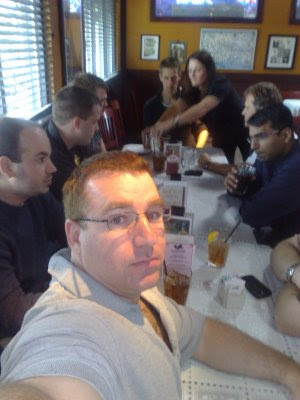