It’s easy to create different Drools Planner configurations, but it’s sometimes hard to determine which configuration is the best for your automated planning problem.

The benchmarker allows you to play out different configurations against each other and it ranks the configurations, but you can easily make a scalability misjudgment: just because config A is better than config B when given 5 minutes, doesn’t mean that A will be better then B when given 60 minutes. Sometimes the opposite is true.

It’s not only interesting to see what best score a configuration has after the given time, but also how it got there. And that’s why the benchmarker now supports outputting a graph with the best score over time. 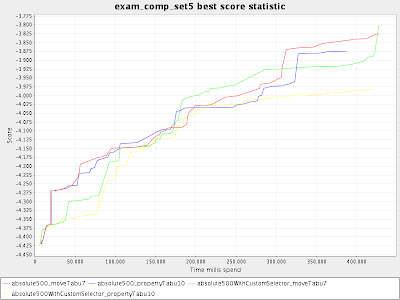 Not all datasets have the same curve. Some datasets are harder because they are more compact (not necessarily bigger), making it harder to move resources around. Harder dataset can separate the weak from the strong configurations more clearly. 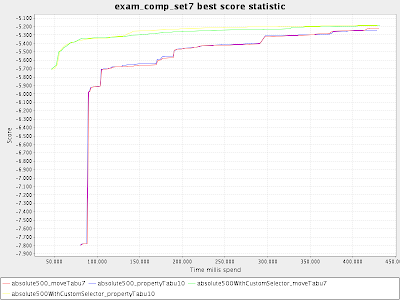 Now, before you start drawing conclusions from the above diagrams, take these things into consideration:

In an upcoming blog/article I ‘ll demonstrate the effect of giving Drools Planner more time and the importance of using a real-world time limitation.

Thanks to the excellent JFreeChart library for making it so easy to turn data into a graph. It’s a pity though that out-of-the-box it uses yellow as the 4th line’s color, making it hard to see on the default white background.