An executable process using the designer

by Kris Verlaenen - February 22, 2011
Process Tools Article Video
Tihomir has been working on the designer lately to make sure that the web-based process designer can be used to create executable processes from scratch using the designer only.

He has created a nice screencast and blogged about it:

“Here is an example of creating and executing a simple BPMN2 process created with the Oryx designer (click on the screenshot below). It shows off the ability to create both business rules and BPMN2 processes in the same environment and expose them to the client application that consume them. 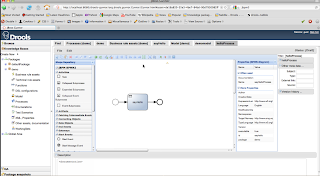 In order to recreate this example, you must use the latest version of the Oryx designer which you can download from here (rename it to designer.war and replace your existing one in $jbossHome/server/$config/deploy directory). If you prefer to use the jbpm-console for executing the process instead of from Eclipse like shown in the example, you can do that as well if you define the process as part of the defaultPackage (or update your jbpm-console configuration to load processes from another package).”