by Kris Verlaenen - March 4, 2011
Process Tools Article
We would like to show you our new and improved BPMN 2.0 Eclipse editor, which is currently being developed for jBPM 5.1 and will support a much larger part of the BPMN 2.0 specification (hopefully even including basic choreography and conversation).
For this, we’ve had a lot of help from the guys at Codehoop. They’ve been working on it for the last few months, and we believe it’s currently at a stage where people can start to play it with and give us feedback. 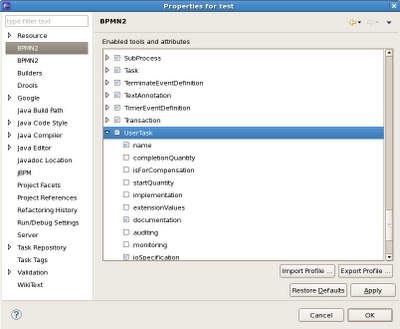 Since it is still work in progress, there are still a few limitations or missing elements, but we should be able to clean it all up pretty soon, and include it as part of jBPM 5.1. But if you’re looking for an open-source BPMN2 editor and might be interested in participating, let us know !

You can find the codebase here. We will be providing an easy-to-use update site for installation once we reach the final milestone, but if you already want to give it a go and build it from source:

There is also a Wiki page that contains some screenshots useful information.

Codehoop is a small agency building Eclipse toolkits and Java+Scala enterprise middleware. The team has been excited to work with Fortune 500 companies as well as small startups. The result is a great variety of expertise on Eclipse technologies, ranging from database management to code editors, visual modelling and vector-based animation studio.

Let us know what you think !