Develop complex jBPM processes all in Guvnor? Yes, you can! 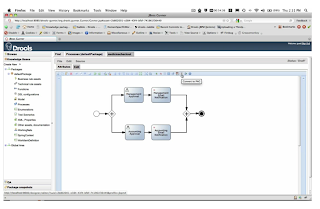 The above video showcasts some of the new jBPM web-based tooling support added to Drools Guvnor and the Oryx Designer used by jBPM to allow both business users and developers to create complex BPMN2.0 processes without depending on the traditional development environments.

In this video we create a simple medicine checkout procedure process which used both human tasks and a custom email notification workitem all in Guvnor, then execute it inside jBPM Console.

Getting Started with the Kie Server Java API
by Karina Varela

5. Techniques to boost a BA Project
by Karina Varela

Dealing with Unexpected Errors in Processes
by Karina Varela