I’m really excited that Rules Fest has managed to persuade Paul Haley to keynote. So if you haven’t bought your tickets yet, what are you waiting for?

Paul Haley
“Currently a consultant at Vulcan, Inc. and principal at Automata, Inc., Paul has been involved in practical AI since the early 80’s. His accomplishments span selling, developing and applying advanced technology in securities, banking, insurance, health care, telecommunications, and government applications. At Inference Corporation, he co-developed ART (Automated Reasoning Tool), the progenitor of CLIPS and later Jess.”

ART really did some amazing stuff back in the day and was probably, and may still be, the most expressive rule engine:
“After benchmarking many expert system shells and rule-based programming languages, NASA standardized on Rete Algorithm-based production systems and selected ART over OPS5, presumably because ART is more expressive and more functional.” (Answers to common questions about AI)
Although I hope we are starting to bite at it’s heels 🙂

Paul was one of the first, over 20 years ago, to write a true opportunistic backward chaining (OBC) system with automatic subgoaling, able to handle real variable unification in a prolog derivation query like way. This very much inspired the OBC work in Drools that we are still in the process of developing:
Data-Driven Backward Chaining (alternative link)

Haley Authority was recognised as the leader in ontologies and natural language authoring. This is very much refected in Paul’s favour topics these days around semantic ontologies and event processing. I’m sure he’ll be discussing these in his keynote, so you really shouldn’t miss it. 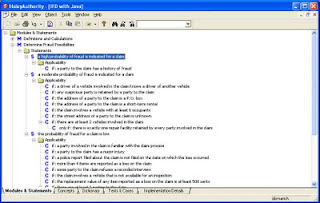