A preview of the Form Builder

by Kris Verlaenen - August 9, 2011
Process Tools Article Video
Whenever human actors participate in business processes (for example using the jbpm-console), forms can be used to show information to these users and/or ask for additional input. For example, the performance evaluation example that is included in the installer uses a simple form (as shown below) to ask the user to fill in some data related to his performance evaluation. 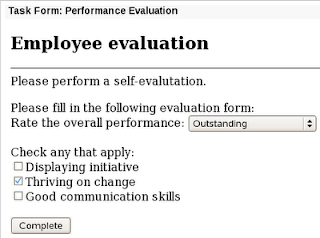 jBPM5 allows you to define these forms yourself, using a HTML template approach, so that they can be used in the console.

We’ve also been working a Form Builder, a web-based application that also allows business users (and not only developers) to create these forms using a visual editor and drag-and-drop. Mariano has published a blog including a cool demo that shows the progress so far.

Not only is the form builder nicely integrated into the existing tooling, it also allows you to generate default forms based on the process definition (based on the expected input and output parameters of the user tasks or process). The user can then customize the generated form and start using it in the console almost immediately.

I can only say congratz ! 🙂

Note that we still need to integrate most of this into our codebase, but we already wanted to share what’s coming.