For the 10th year in a row, I attended DevoxxBe.
It’s my favorite Java conference, but the talk schedule isn’t always optimal: sometimes I want to see 2 great talks at the same time!
So at the Hackergarten at Devoxx, between attending talks, a few of us started building a webapp to improve the schedule.
We’re calling the prototype OptaConf and it’s under Apache License.

For the past 4 years, I ‘ve been working in my corner of the world (OptaPlanner, Drools, etc),
so my experience on other enterprise Java technologies (JavaEE) is getting a bit stale.
Presentations (such as those at Devoxx) keep me in touch with the ever changing Java enterprise world,
but nothing beats getting some personal hands-on experience by writing a realistic webapp.

Writing the backend turned out to be a breeze, using JavaEE 7 technologies:

All in all, this has come together well. In less than 1 day’s work, I was able to implement the entire backend:
import the Devoxx, optimize it and expose it as a REST service.
Of course, having the experts around to immediately solve pitfalls, helped.

What I really liked it the pom.xml configuration. This is the entire dependency tree to have all those techs available:

I didn’t work on the frontend myself, so it’s hard to comment (but that won’t stop me). We had 3 incarnations.
All used AngularJS, some with bower and other stuff.
Personally I feel all web ui technologies are clunky: every year there’s a new one being hyped
and we should all migrate to that one. Some (Flex for example) went from hype to dead in less than a year.

Before: the original Devoxx 2014 schedule 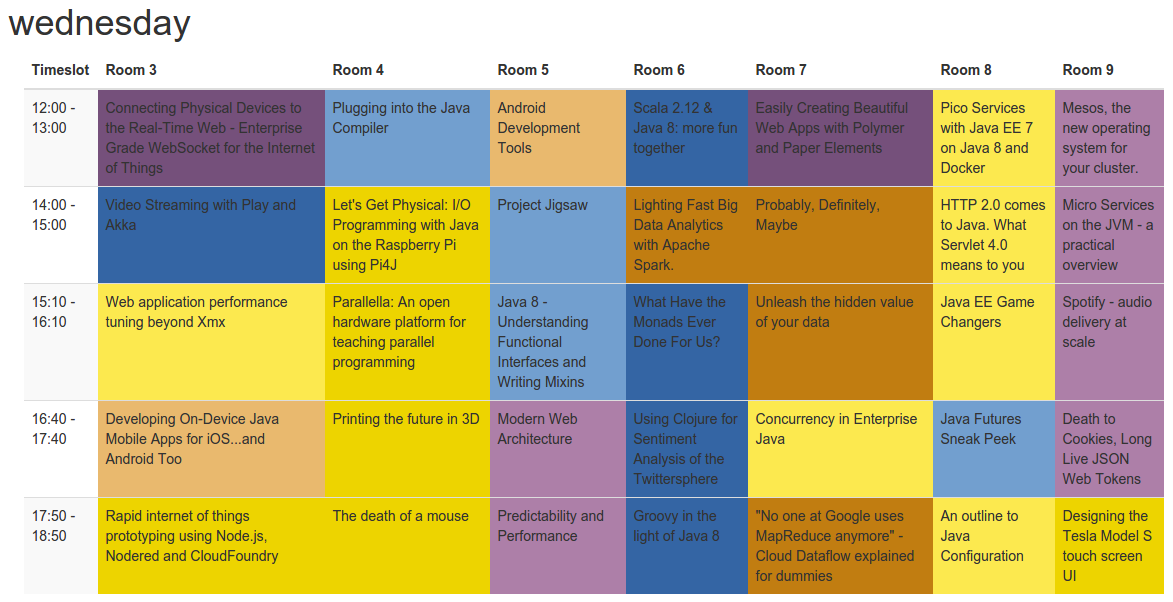 Above is the original Devoxx 2014 schedule for Wednesday.
Each track (which are a set of related talks) has it own background color.

After: the POC optimized Devoxx 2014 schedule 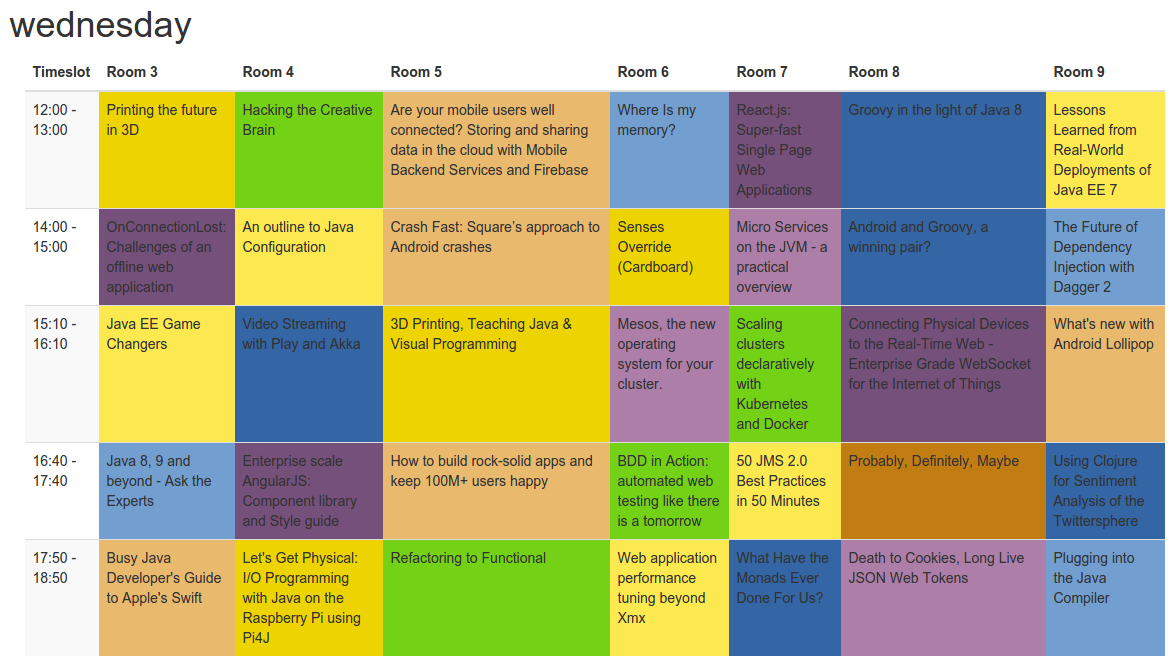 Above is the schedule after it’s optimized with OptaPlanner for Wednesday.
Notice how I can now watch all the talks of an entire track without missing a single one.
This optimization already takes speaker conflicts into account.

Additional constraints should be easy to add, such as:

We just need more input data, such as: which talks are popular, which speakers are rock stars, …​

On the backend, it has become a lot simpler. JavaEE 7 just works. It’s much simpler than it’s predecessors. Most rough edges are gone.
For full disclosure: I work for Red Hat, so I stuck to their implementations whenever there was a choice.

On the frontend however…​ there’s just so much choice and so many trade-offs between the technologies,
that I am reluctant to recommend anything really: they all suck, all in their own special way.
Either you’re writing lots of indirectional JavaScript
or you’re dealing with a long monolithic compilation or you’re stuck with a over-engineered, chatty lifecycle.
And those are just the top 3 web UI frameworks!