by Maciej Swiderski - December 16, 2014
Process Article
Once jBPM is deployed to given environment and is up and running most of actual maintenance requirements come into the picture. Running BPM deployment will have different maintenance life cycle depending on the personas involved:
In this article I’d like to focus on administrators to give them a bit of power to maintain jBPM environments in a easier way. So let’s first look at what sort of thing they can be interested with….
jBPM when configured to use persistence will store its state into data base over JPA. That is regardless if jbpm-console/kie-wb is used or jBPM runs in embedded mode. Persistence can be divided into two sections: 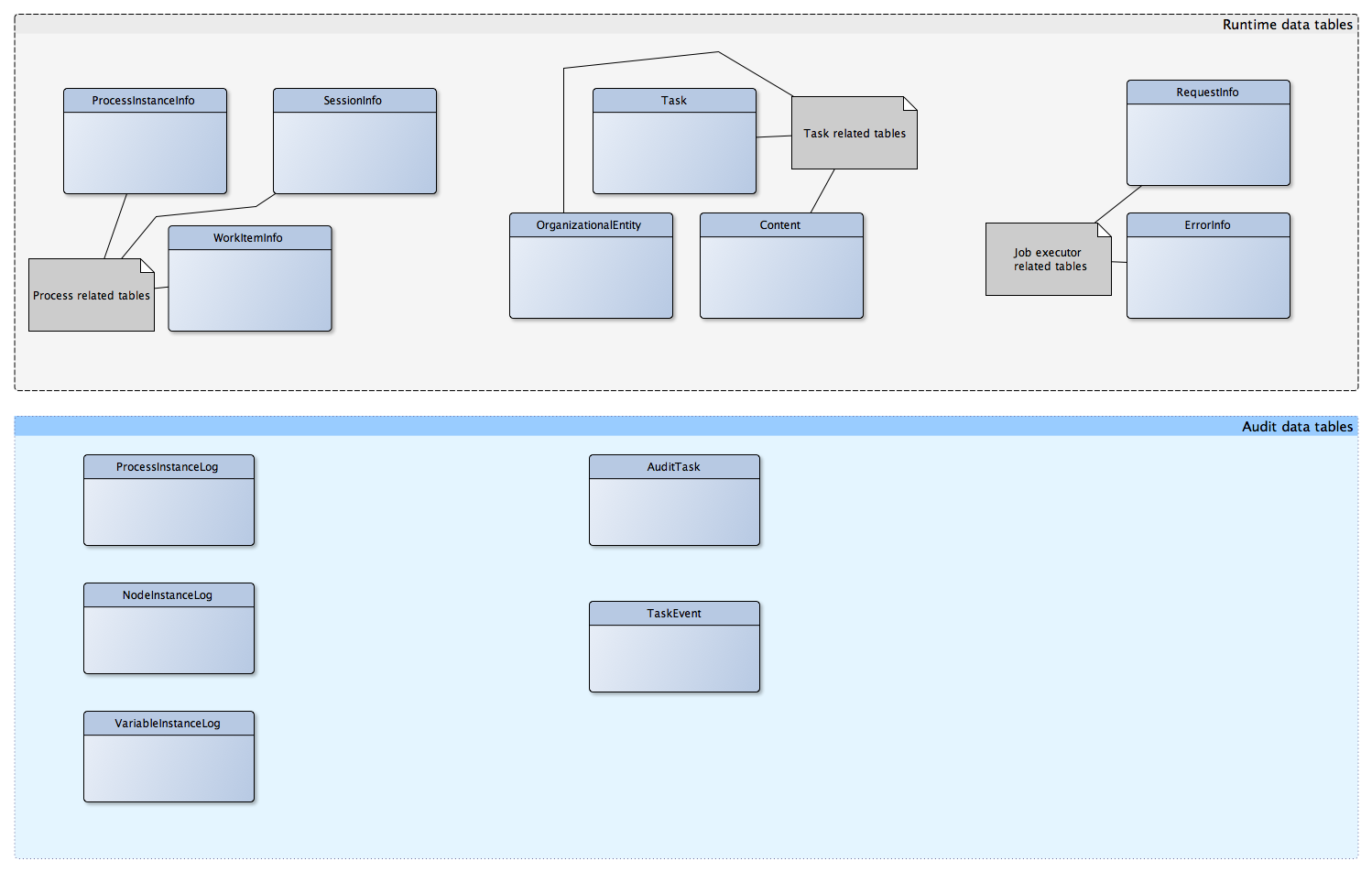 Above diagram presents only subset of data model for jBPM and aims at illustrating important parts from maintenance point of view.
Important information here is that “runtime data” is cleaned up automatically on life cycle events:
So far so good, we have cleanup procedure in place but at the same time we loose all trace of process instances being executed at all. In most of the case this is not an acceptable solution…
And because of that there are audit data tables available (and used by default) to keep trace of what has been done, moreover it does keep track of what is happening in the environment as well. So it is actually great source of information in any given point in time. Thus name audit data might be slightly misleading … but don’t worry it is the first class citizen and is actually used by jbpm services  to provide you with all the details about current view on past and present.
So that puts us in tight spot – that data is gathered in audit tables but we do not have control over how long would that be stored in these tables. In environments that do operate on large number of process instances and task instances this might be seen as a problem. To help with this maintenance burden a clean up procedure has been provided (from version 6.2) that will allow two approaches to the topic:

LogCleanupCommand is jbpm executor command that consists of logic to clean up all (or selected) audit data automatically. That logic is simply taking advantage of audit API to clean it up but provides one significant benefit – it can be scheduled and executed repeatedly by using reoccurring jobs feature of jbpm executor. Essentially this means that once job completes it provides information to the jbpm executor if and when next instance of this job should be executed. By default LogCleanupCommand is executed one a day from the time it was scheduled for the first time. It of course can be configured to run on different intervals.
NOTE: LogCleanupCommand is not registered to be executed out of the box to do not remove data without explicit request so it needs to be started as new job, see short screen cast on how to do it.
LogCleanupCommand comes with several configuration options that can be used to tune the clean up procedure.
Another important aspect of the LogCleanupCommand is that it protects the data it removes by making sure it won’t delete active instances such as still running process instances, task instance or executor jobs.

NOTE: Even though there are several options to use to control what data shall be removed, recommended is to always use date as all audit data tables do have timestamp while some do not have other parameters (process id or deployment id).

A short screencast shows how LogCleanupCommand can be used in practice. It shows to scenarios (two execution of a command) where both are just single run:

For the first run we only see that one job has been removed as only that met the criteria to be older than 1 day and all other was started same day. Then the second run that removes everything that was completed did actually removed them as expected.

Instead of having automatic cleanup of jobs, administrators can make use of audit API to do the clean up manually with more control over parameters to control what is to be removed. Audit API is divided in three areas (same as shown on the diagram) that covers different parts of the environment:
API cleanup support is done in hierarchical way so in case all needs to be cleaned up it’s enough to take the last audit service from hierarchy and all operations will be available.
Example 1 – remove completed process instance logs
Example 2 – remove task audit logs for deployment org.jbpm:HR:1.0
Example 3 – remove executor error and requests

NOTE: when removing jbpm executor entries make sure first error info is removed before request info can be removed due to constraints setup on data base.

See API for various options on how to configure cleanup operations:

Equipped with these features jBPM environment can be kept clean and healthy for long long time without much effort.
Ending always same way – feedback is more than welcome.