Drools: A detailed description of internal code cleanups for fireAllRules, fireUntilHalt and Timers.

by Mark Proctor - December 3, 2015
Process Rules Article
In June we blogged about a new internal state machine to manage the interaction of User, Timer and Engine threads. We’ve now done another big internal clean up of this code, to make it easier to read and easier to understand.

As previous mentioned all actions (insert, update, delete etc) are now placed into a thread safe propagation queue. The user thread, when executing those actions, never touches the engine any more, not even the alpha network. This gives improved thread safety. Instead when the engine starts it first drains and evaluates this queue, which can result in alpha network evaluations, before doing rule evaluation and firings.

As well as User and Engine thread separation the other aim of the state machine was to co-ordinate the Timer thread. When a timer kicks off the engine may be INACTIVE or it may be running. If the engine is active the Timer should just submit an entry into the propagation queue and let the current executing thread handle the job. If the engine is not active and the timer rule is async the timer thread should take care of the evaluating and firing, via the executeTask method. The state machine is designed to minimise sync’s and locks to keep contention minimal.

The engine now has 5 possible states it can be in.  INACTIVE is the starting state. 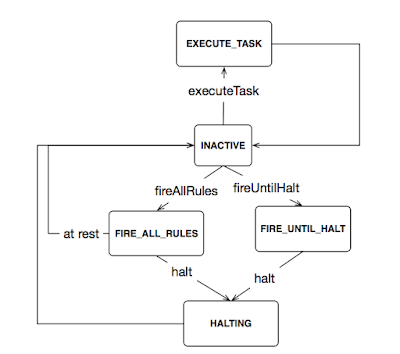 Engine  evaluation and rule firing has three potential entry points fireAllRules, fireUntilHalt and async timer rules – the later is done through the executeTask part. We have unified fireAllRules and fireUntilHalt into a single fireLoop method, that uses a strategy class, passed as an argument, to handle the potential rest state of the loop.  The engine is considered at rest when there are no rules firing, when there are no more agenda group to evaluate and when the queue is empty.

FireAllRules all rules will then set the engine to INACTIVE and the loop will exit. FireUntilHalt will make the current thread wait, until more work comes into the queue for processing. Work has been done here to make sure there are no gaps, and loss of executions, during those state transitions.

When a thread wants to transition to FIRE_ALL_RULES or FIRE_UNTIL_HALT or EXECUTE_TASK, it must go through waitAndEnterExecutionState. If the engine is INACTIVE it can transition straight away, if not it’ll go into a wait state until the current executing thread has finished and returned the engine back to INACTIVE:

Let’s look at how fireAllRules() uses this. Note firstly that if the engine is already running, because fireAllRules or fireUntilHalt have been previous called and still running, it will simply exit. Second note it only holds the sync point long enough to either exit or make the desired transition. Once the engine is in FIRE_ALL_RULES state it can let go of the sync block and the state machine will stop anything from interfering with it.

The fireLoop is now generic and used by both fireAllRules and fireUntilHalt, with the use of the RestHandler strategy to handle the logic for when the engine comes to a rest point.