by Manaswini Das - July 29, 2016
Process Article
The jBPM 7 release will include an integrated security management solution to allow administrator users to manage the application’s users, groups and permissions using an intuitive and friendly user interface. Once released, users will be able to configure who can access the different resources and features available in the workbench.

Users can be assigned with more than one role and/or group. It is always mandatory to assign at least one role to the user, otherwise he/she won’t be able to login.

A permission is basically something the user can do within the application. Usually, an action related to a specific resource. For instance:

A permission can be granted or denied and it can be global or resource specific. For instance:

As you can see, a permission is a resource + action pair. In the concrete case of a perspective we have: read, update, delete and create as the actions available. That means that there are four possible permissions that could be granted for perspectives.

The set of permissions assigned to every role and/or group is called the authorization (or security) policy. Every application contains a single security policy which is used every time the system checks a permission.

The authorization policy file is initialized from a file called WEB-INF/classes/security-policy.properties under the application’s WAR structure.

NOTE: If no policy is defined then the authorization management features are disabled and the application behaves as if all the resources & features were granted by default.

Here is an example of a security policy file:

Every entry defines a single permission which is assigned to a role/group. On application start up, the policy file is loaded and stored into memory.

The Security Management perspective is available under the Home section in the workbench’s top menu bar.

The next screenshot shows how this new perspective looks:

Compared to the previous version this new perspective integrates into a single UI the management of roles, groups & users as well as the edition of the permissions assigned to both roles & groups. In concrete:

All of the above together provides a complete users and groups management subsystem as well as a permission configuration UI for protecting access to some of the workbench resources and features. 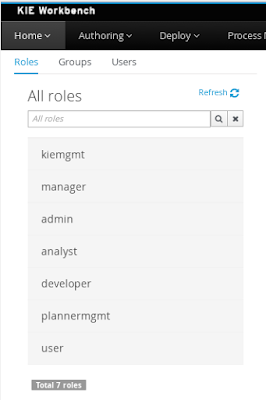 Unlike users and groups, roles can not be created nor deleted as they come from the application’s web.xml descriptor.

NOTE: User & group management features were described in detail in this previous article.

After clicking on a role in the left sidebar, the role editor is opened on the screen’s right, which is exactly the same editor used for groups.

The above editor is used to set several security settings regarding both roles and groups.

This is the perspective where the user is directed after login. This makes it possible to have different home pages for different users, since users can be assigned to different roles or groups.

It is used to determine what settings (home perspective, permissions, …​) have precedence for those users with more that one role or group assigned.

For perspectives, organizational units, repositories and projects it is possible to define global permissions and add single instance exceptions afterwards. For instance, Read access can be granted to all the perspectives and deny access just to an individual perspective. This is called the grant all deny a few strategy.

The opposite, deny all grant a few strategy is also supported:

NOTE: In the example above, the Update and Delete permissions are disabled as it does not makes sense to define such permissions if the user is not even able to read perspectives.

The security policy is stored under the workbench’s VFS. Most concrete, in a GIT repo called “security”. The ACL table is stored in a file called “security-policy.properties” under the “authz” directory. Next is an example of the entries this file contains:

Every time the ACL is modified from the security settings UI the changes are stored into the GIT repo. Initially, when the application is deployed for the first time there is no security policy stored in GIT. However, the application might need to set-up a default policy with the different access profiles for each of the application roles.

In order to support default policies the system allows for declaring a security policy as part of the webapp’s content. This can be done just by placing a security-policy.properties file under the webapp’s resource classpath (the WEB-INF/classes directory inside the WAR archive is a valid one). On app start-up the following steps are executed:

The above is an auto-deploy mechanism which is used in the workbench to set-up its default security policy.

Notice, despite using the split approach, the “security-policy.properties” must always be present as it is used as a marker file by the security subsystem in order to locate the other policy files. This split mechanism allows for a better organization of the whole security policy.

Uberfire provides a complete API around permissions. The AuthorizationManager is the main interface for checking if permissions are granted to users.

Using the fluent API can also be expressed as:

The security check calls always use the permissions defined in the security policy.

For those interested in those APIs, an entire chapter can be found in the Uberfire’s documentation.

The features described above will bring even more flexibility to the workbench. Users and groups can be created right from the workbench, new assets like perspectives or projects can be authored and, finally, specific permissions can be granted or denied for those assets.
In the future, along the improvement of the authoring capabilities more permission types will be added. The ultimate goal is to deliver a zero/low code, very flexible and customizable tooling which allows to develop, build and deploy business applications in the cloud.