Mechanic scheduling (part 1) – Can OptaPlanner keep up with a keynote audience of thousands?

by Geoffrey De Smet - May 9, 2019
Optimization Article
This year, my team and I participated in the Red Hat Summit keynote.
In front of 7000 people, we demonstrated real-time scheduling,
reacting on input coming from the audience’s smartphones.
In the past 2 months, we created this application together with the other middleware teams
and under the excellent guidance of Burr Sutter.
It integrates various technologies
such as Android/Iphone accelerometers, OpenShift/Kubernetes, Quarkus,
KNative, TensorFlow, Kafka/Strimzi, Camel, Node.js, Godot, Infinispan, Drools and of course OptaPlanner.
We wrote a simulation of a typical manufacturing floor, involving machines at assembly lines.
This led to an interesting conversation when I first showed it to my wife:
“”
“Look, darling. This is the keynote demo we’ve been working on the past few weeks.”
“That looks like a video-game…​ Is that Mario and Luigi running around?”
“Well, notice how OptaPlanner optimizes their traveling time so they can spend more time fixing machines.”
“Are you really going to show this to 7000 business people?”
“Yes, of course. It’s going to be beautiful.”
“”

This is how it turned out:

The machines (A-J) suffer attrition, which is detected by movements sensors.
With the help of the audience, we simulate those sensors, by capturing accelerometer data from their phones.
When things go shaky, things go breaky.
So as the audience shake their phone – or do more complex gestures – their machines receive damage.
Each part of the audience is damaging one machine,
and if the health of their machine drops to zero, it falls apart.
Now, those machines require maintenance before they break, which is where OptaPlanner comes in.
There are only 2 or 3 mechanics to fix them.
And while mechanics are traveling to a machine or fixing it, all machines continue to lose health.
Deciding the order in which to fix them, as damage comes in concurrently, is difficult.
Luckily, OptaPlanner schedules those mechanics for us.
It reacts to health changes in real-time, as shown in this video:

There is only one goal: don’t let any machine reach 0%.
This might seem like one simple constraint,
but it’s actually two adversarial constraints:
These 2 constraints are in competition with each other. They lead to different solutions: 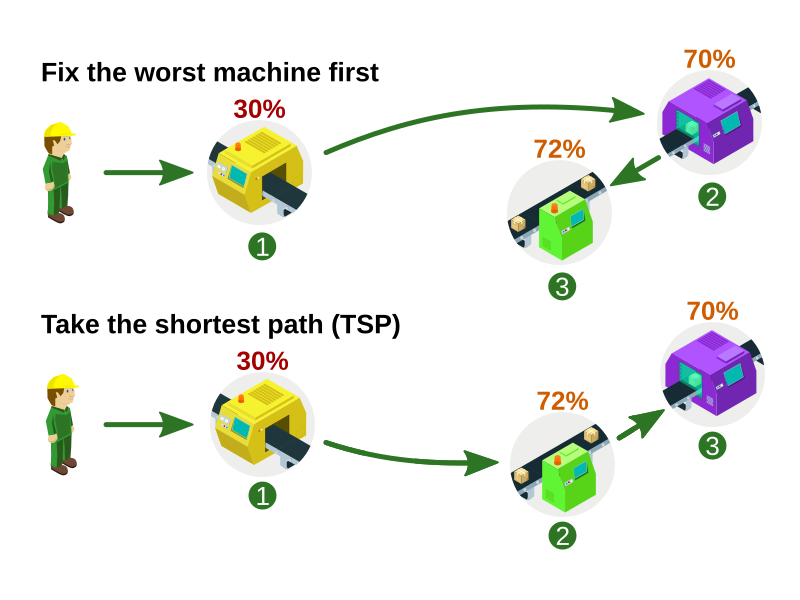 What’s less obvious is how this impacts the makespan,
which is the amount of time the mechanics need to fix all the machines one time.
A longer makespan reduces productivity: 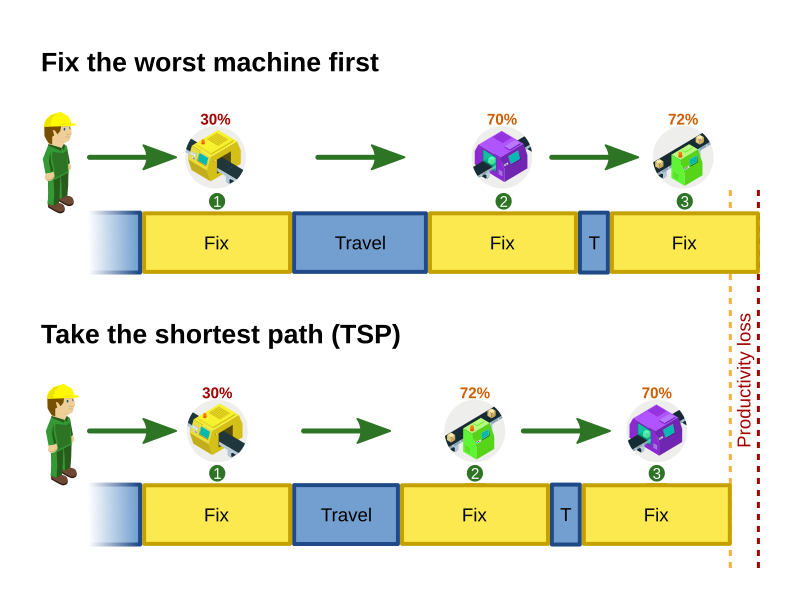 So we ended up having to weight these two constraints against each other.
We implemented that by penalizing, per machine,
the amount of attrition multiplied by the duration until the machine is fixed.
So the more damage, or the longer it takes to fix a machine,
the less likely that OptaPlanner’s solution will schedule that.

In the academic Operations Research world, this problem is known as the Vehicle Routing Problem (VRP),
in which we need to send a number vehicles (such as trucks) to a number of locations: 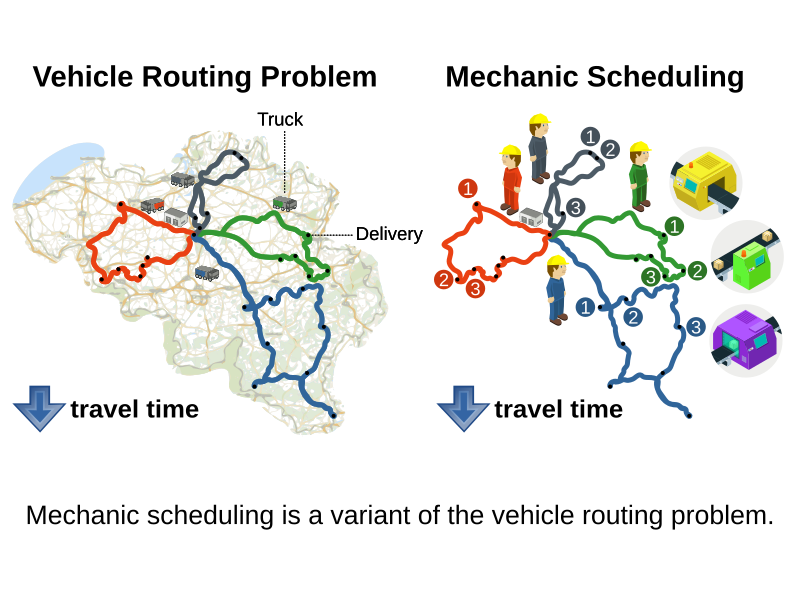 It’s the same problem, with a few variations on the constraints.
Now, OptaPlanner is really good at optimizing vehicle routing problems at scale:
it saves some of our customers hundreds of millions of dollars per year
by reducing their overall travel time by 15% or more.
This also heavily reduces their fuel consumption,
decreases their carbon footprint, which is great for the environment too!
Learn more about optimizing VRP’s with OptaPlanner
or take a look at Jiri’s latest demo of the optaweb-vehicle-routing reference architecture: