In this post, we’ll introduce a new jBPM API which allows for predictive models to be trained with Human Tasks (HT) data and for HT to incorporate model predictions as outputs and complete HT without user interaction.

This API will allow you to add Machine Learning capabilities to your jBPM project by being able to use, for instance, models trained with historical task data to recommend the most likely output. The API also gives developers the flexibility to implement a “recommendation-only” service (which only suggests outputs) as well as automatically completing the task if the prediction’s confidence meets a user-defined prediction confidence threshold.
This API exposes the HT handling to a recommendation service.
A recommendation service is simply any third-party class which implements the org.kie.internal.task.api.prediction.PredictionService interface.

This interface consists of three methods:

This class will consist of:

As an example, let’s assume our confidence represents a prediction probability between 0.0 and 1.0. If the confidenceThreshold is 0.7, that would mean that for confidence > 0.7 the HT outputs would be set to the outcome and the task automatically closed. If the confidence <= 0.7, then the HT would set the prediction outcome as suggested values, but the task would not be closed and still need human interaction. If the outcome is empty, then the HT life cycle would proceed as if no prediction was made.
By defining a confidence threshold which is always higher than the confidence, developers can create a “recommendation-only” service, which will assign predicted outputs to the task, but never complete it. 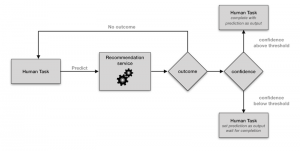 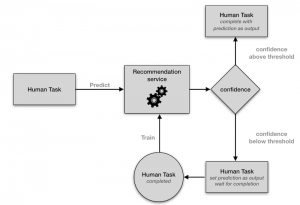 An example project is available here. This project consists of a single Human Task, which can be inspected using Business Central. The task is generic and simple enough in order to demonstrate the working of the jBPM’s recommendation API.

For the purposes of the demonstration, this task will be used to model a simple purchasing system where the purchase of a laptop of a certain brand is requested and must be, eventually, manually approved. The tasks inputs are:

The task provides as outputs:

This repository contains two example recommendation service implementations as Maven modules and a REST client to populate the project with tasks to allow the predictive model training.

Start by downloading, or alternatively cloning, the repository:

The resulting JARs files can then be included in the Business Central’s kie-server.war located in standalone/deployments directory of your jBPM server installation. To do this, simply create a WEB-INF/lib, copy the compiled JARs into it and run

The PMML-based service expects to find the PMML model in META-INF, so after copying the PMML file in jbpm-recommendation-pmml-random-forest/src/main/resources/models/random_forest.pmml into META-INF, it should also be included in the WAR by using

jBPM will search for a recommendation service with an identifier specified by a Java property named org.jbpm.task.prediction.service. Since in our demo, the random forest service has the identifier SMILERandomForest, we can set this value when starting Business Central, for instance as:

For the purpose of this documentation we will illustrate the steps using the SMILE-based service. The PMML-based service can be used by starting Business Central and setting the property as

Once Business Central has completed the startup, you can go to http://localhost:8080/business-central/ and login using the default admin credential wbadmin/wbadmin. After choosing the default workspace (or creating your own), then select “Import project” and use the project git URL:

The repository also contains a REST client (under client) which allows to add Human Tasks in batch in order to have sufficient data points to train the model, so that we can have meaningful recommendations.

NOTE: Before running the REST client, make sure that Business Central is running and the demo project is deployed and also running.

The class org.jbpm.recommendation.demo.RESTClient performs this task and can be executed from the client directory with:

The prices for Lenovo and Apple laptops are drawn from Normal distributions with respective means of 1500 and 2500 (pictured below). Although the recommendation service is not aware of the deterministic rules we’ve used to set the task outcome, it will train the model based on the data it receives. The tasks’ completion will adhere to the following logic:

The client will then simulate the creation and completion of human tasks, during which the model will be trained.

As we’ve seen, when creating and completing a batch of tasks (as previously) we are simultaneously training the predictive model. The service implementation is based on a random forest model a popular ensemble learning method.

When running the RESTClient, 1200 tasks will be created and completed to allow for a reasonably sized training dataset. The recommendation service initially has a confidence threshold of 1.0 and after a sufficiently large number (arbitrarily chosen as 1200) of observations are used for training, the confidence threshold drops to 0.75. This is simply to demonstrate the two possible actions, i.e. recommendation without completing and completing the task. This also allows us to avoid any cold start problems.

After the model is trained with the task from RESTClient, we will now create a new Human Task.

If we create a HT requesting the purchase of an “Apple” laptop from “John” with the price $2500, we should expect it to be approved.

If fact, when claiming the task, we can see that the recommendation service recommends the purchase to be approved with a “confidence” of 91%. 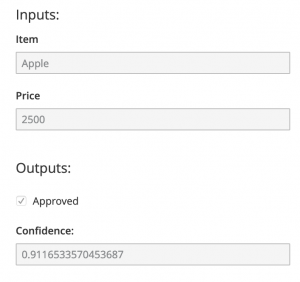 If he now create a task for the request of a “Lenovo” laptop from “Mary” with the price $1437, he would expect it to be approved. We can see that this is the case, where the form is filled in by the recommendation service with an approved status with a “confidence” of 86.5%. 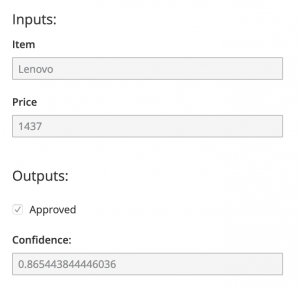 We can also see, as expected, what happens when “John” tries to order a “Lenovo” for $2700. The recommendation service fills the form as “not approved” with a “confidence” of 71%. 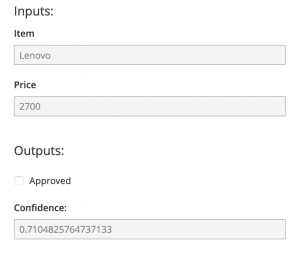 In this service, the confidence threshold is set as 1.0 and as such the task was not closed automatically.

The minimum number of data points was purposely chosen so that after running the REST client and completing a single task, the service will drop the confidence threshold to 0.75.

The second example implementation is the PMML-based recommendation service. PMML is a predictive model interchange standard, which allows for a wide variety of models to be reused in different platforms and programming languages.

The service included in this demo consists of pre-trained model (with a dataset similar to the one generated by RESTClient) which is executed by a PMML engine. For this demo, the engine used was jpmml-evaluator, the de facto reference implementation of the PMML specification.

There are two main differences when comparing this service to the SMILE-based one: 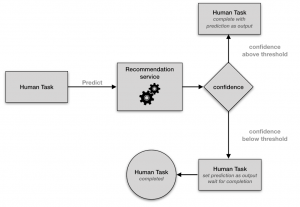 You can verify that the Business Central workflow is the same as with the SMILE service, although in this case no training is necessary.

The above instructions on how to setup the demo project are also available in the following video (details are in the subtitles):

In conclusion, in this post we’ve shown how to use a new API which allows for predictive models to suggest outputs and complete Human Tasks.

We’ve also shown a project which can use different recommendation service backends simply by registering them with jBPM without any changes to the project.

Why not create your own jBPM recommendation service using your favourite Machine Learning framework, today?

Counterfactuals; getting the right answer
by Roberto Emanuel

Shopping recommendations in PMML – Kogito at...
by Gabriele Cardosi