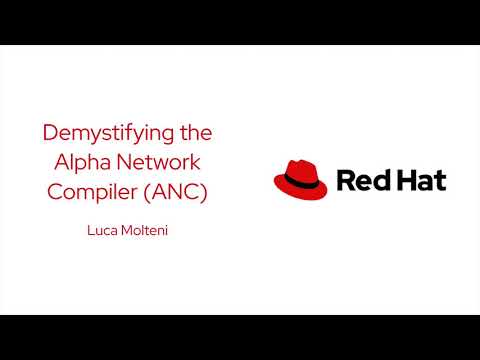 Drools is a rule engine based on PHREAK, an evolution of the original 1974 Rete Algorithm by Charles L. Forgy.
In this article we’re going to take a deep insight to some of the internals of the system and to a specific feature called "Alpha Network Compiler", which has been present for a quite while in the code base but only recently has started to being used actively.

Rules evaluation in Drools is based on a data structure called Rete (meaning "network" in Latin) which is a discrimination tree comprised of different possible kind of nodes. Here’s some examples of such nodes:

The Alpha Network Compiler is an optimization that is effective when the Rete is assimilable to a pure "Alpha Network" only, which is a shortcut to say it’s a Rete consisting only of Object Type Nodes, Alpha Nodes and Rule Terminal Nodes.
In this article, for the sake of simplicity there won’t be any references to other kinds of nodes.

When dealing with Drools rules evaluation it’s useful to see the relationship between the nodes in a graphical way, so here’s an example of a very simple Rete.

You can see the various kinds of nodes are coloured in different ways: Object Type Nodes (also known as OTN) are pink/salmon, Alpha Nodes are blue and Rule Terminal Nodes are green.
We have a yellow node called "entry-point", which is where the evaluation of the rule starts.
Every object (sometimes called "fact") inserted inside Drools’ working memory is evaluated against each node in order, if the evaluation succeeds it’s propagated to the next one until it reach the Rule Terminal Node.

In this article we’re going to create a simple rete to show how the evaluation works, but I’ll also try to put the references of the original source code of Drools, so that you can check how the real production code works.

What is an Object Type Node?

Think of an Object Type Node, (sometimes called "OTN") as a Java instanceof operation. If an object matches the type defined in the OTN it will enter the Rete from that node.
There’s one OTN for each Java Type defined in each pattern. If two rules have two different patterns on the same object type then only one OTN will be created.

What is an Alpha Node?

When a Drools Pattern has two different constraints, then one node for each constraint will be created.

In the diagram shown before, we have a Pattern with three constraints, therefore that will require a total of three Alpha Nodes.

A Rule Terminal Node represent the end of an evaluation.
In this article we deal only with Alpha Terminal Nodes, which represents the end of the evaluation of an Alpha Network.
During a typical Drools evaluation the terminal nodes interact with the Agenda, which is the data type we use to synchronize the
consequence of the rules, but here we skip the explanation of the Agenda as it’s not useful to the purpose of this article.

How are Alpha Nodes evaluated?

What does actually mean to "evaluate" a node? It means to propagate the call of a method recursively in the next node of the tree.
If we want to code this in a simple way, we might think of a common interface for Drools nodes.
This interface will have the method that we need to propagate among nodes to evaluate the Rete, in this case it’s called assertObject.

And each node will implement this method in a different fashion.

Here’s an example on how we could write a simple Object Type Node (the actual code is much more complicated as there’s some caching of the types:
here the value is cached and here it’s propagated.)

After being evaluated in the Object Type Node, the OTN will call assertObject on the first child, which will evaluate the constraints (in this case a simple Java predicate) to eventually propagate the assertion to the next node.
When the last node is an Rule Terminal Node, the evaluation will end.

Here’s a stub implementation of a Terminal Node, which doesn’t do anything at all.

When there are multiple non-related Alpha Nodes, each Alpha Node will be checked against the input object.(see Drools’ CompositeObjectSinkAdapter)
This is not efficient as we need to check a predicate that could be expressed in Java with a simple if using dynamic dispatch against every single Alpha Node. This is due to the fact that the JVM doesn’t know the concrete implementation of the DroolsNode interface.
The code shown in this article is simple enough and works well for demonstration purposes, but is terribly inefficient.
Consider that common Drools projects might have thousands Alpha Nodes, if not more.

Here’s an example of the "brute force" evaluation of all the constraints.

Hashing is one of the first optimization that is implemented in the current code base.
When a field is hashable, for example when dealing with String and Integers, after a certain amount of Alpha Nodes the system will keep an internal map of nodes using the fact value as the key.
This improves the evaluation of a fact against multiple Alpha Nodes, as a simple .get in the map will bring us the correct next node to propagate the object to.

When we build the rete, we could do something similar to this snippet of code, assuming that we have patterns that check Strings that are equals to "10", "20" and "30":

Then the evaluation will be much faster using the Map get method.

What I wanted to show you is just one of the optimisation that is in the code base.
There are many more and most of them are specialized in collapsing the search space, effectively reducing the number of evaluations.

The Alpha Network Compiler leverages the Java code generation to have a faster evaluation of the constraints.
It supports most of the optimisation that are usually applied in-memory, such as the Hashing explained before or Range Indexing
creating a snapshot of the code that is heavily optimised.

Here’s the Java code produced in the worst case scenario, given this rule:

If we assume that these constraints aren’t indexable, it will generate this code

Which is basically a Java nested if, using constraints instead of if conditions.
As you can see there are no Alpha Nodes in this propagateAssertObject method, compared to the non-materialized version.
The constraints are unwrapped from the Alpha Node and set as a field of the class.

The order of the ifs will be determined by the Alpha Node Sharing optimization we saw before, so it’s faster than evaluating the ifs in a brute force order.
For example these rules, with one identical constraint:

As you can see there is an external if that maps to the age > 20 conditions and then the two specific ifs afterwards.

A more interesting fact happens when we have multiple hashable constraints as we saw before, let’s take as an example these rules:

Will generate this method instead

By inlining the strings as keywords inside a switch statement we leverage Java internal dispatch to get even faster results.
We have provided a benchmark
that demonstrates that this approach is faster than the worst-case brute force.
Here’s the results:

How to use the Alpha Network Compiler?

There is an ongoing work for an experimental feature in the current Drools code base in which we will use the Alpha Network Compiler to evaluate a DMN Decision Table in the fastest way possible.
Here’s an example of such table, for more information on what DMN Decision Tables are check the DMN documentation.

We parse a DMN Decision Table and for each cell we generate an Alpha Node with a constraint.
Then, after a round of node sharing, we give the Alpha Nodes as inputs of the ANC (Alpha Network Compiler) and we generate the class using the output of the Decision Table as a Rule Terminal Node.
We created a benchmark out of a pragmatic use-case and confirmed that this approach is indeed faster than evaluating a Decision Table with a brute force approach. 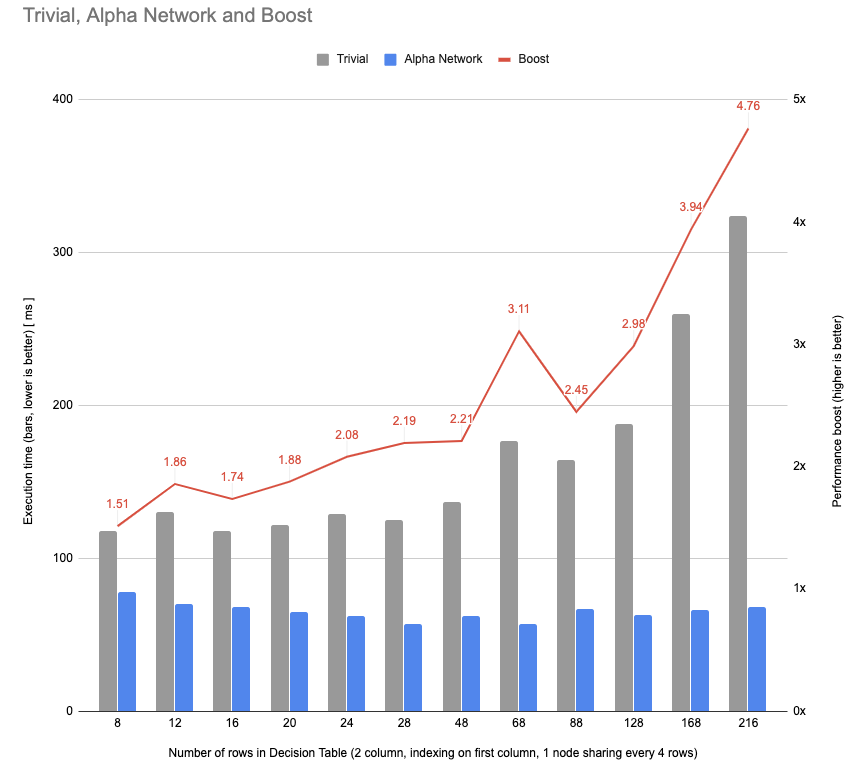 The current implementation is stil a proof-of-concept and not production ready, but certainly the performance metrics collected demonstrate the benefits, then we’ll further evolve it to have the fastest Decision Table evaluation we can get, leveraging all the optimisation we showed in Drools before.

Here’s an example of what we produce

This is a FEEL constraint >= 18 translated into Java code.

This is one the classes that we generate to create the Rete network. As you can see for each row in the Decision Table we create a series
of Alpha Nodes using the createAlphaNode method that supports the Alpha Node sharing, and then we link the nodes together creating an Alpha Network.
At the end we add a Rule Terminal Node with the result, in this case

Here we have the class that generates the rete in the initRete method and that evaluates it in the evaluate method.

Finally here’s part of the compiled Alpha Network. Only a few of the constraints in fields are shown.
The interesting part is in the propagateAssertObject method.
Even though this specific example doesn’t support inlining, we can see it’s exploiting the Alpha Node sharing to reduce the number of the evaluation
compared to the original "brute force" evaluator.

We don’t consider compiled Alpha Network only as an performance optimisation but we think in the future it could become also a "lean" representation of an Alpha Network without using the full rete in memory.
The work of the DMN Alpha Network is still a work in progress. We still to need to support all the possible hit policies and moreover move most of the generation at compile time, so that when instantiating the compiled Alpha Network we don’t need the full rete.
Currently this is not doable, if you check the setNetworkNodeReference that unwraps the constraint in fields you can see it takes the node of the Rete as an input, but this is totally avoidable.
We could also inline the constraints and therefore removing LambdaConstraints that use the virtual table indirection we discussed before.

We saw some of the internals of Drools describing a simple way to evaluate a Rete network, some of the optimization we use in memory and those used while generating the Compiled Alpha Network. After that we saw an experimental usage of the Alpha Network to evaluate in an efficient way DMN Decision Tables.