We already talked about the importance of the Boxed Expression Editor.

In this article, let’s explore better the reasons which led to the new editor.

Moreover, we will provide more information about the new Boxed Expression Editor structure and how it will interact with the rest of the editor.

Why a new editor?

As already stated, the existing editor is just working fine. However, it has few limitations that are slowing down the development of new features.

Why is this happening? In my opinion, for two reasons:

The above points caused several issues. Just to mention a couple:

The rewrite of the Boxed Expression Editor is following the new architectural standards established by Kogito-based projects.

It is just a React component that is shipped as part of the boxed-expression-component package application.

A tiny React application in the showcase folder shows how it can integrate the BoxedExpressionEditor component inside another application. We talked about showcases there.

The main component exported by this package is the BoxedExpressionEditor.tsx.

This React component follows the composition pattern, composing (and often reusing) different small parts together. In the picture below, you can have an idea of it. 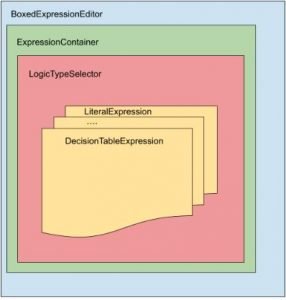 For example, a list can have several items. Furthermore, each item can be a different expression: 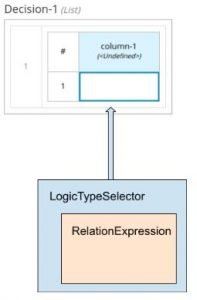 It can be added anywhere in the editor, giving as input to it the node selector, where the component will be appended, and the expression to render.

A layer between the component and the DMN Editor will be responsible for converting and synchronizing the expression models with the jsInterop classes.

When the expression model changes, the component is re-rendered.

When the component edits the expression definition, it propagates the changes to the model by using the functions defined in a JavaScript namespace called beeApiWrapper.

On the DMN editor side, a service will listen to these functions and update the models accordingly.

Development in this area is still evolving. In the DMN editor, during this transition period, you will be able to switch between the old and the new Boxed Expression Editor with a single click:

Anyway, you have also the possibility to switch back to the old implementation if you find that something is not working as expected:

In that case, don’t worry! Improvement is continuously in progress. Just remember to submit feedback that will help us to improve the new Boxed Expression Editor!